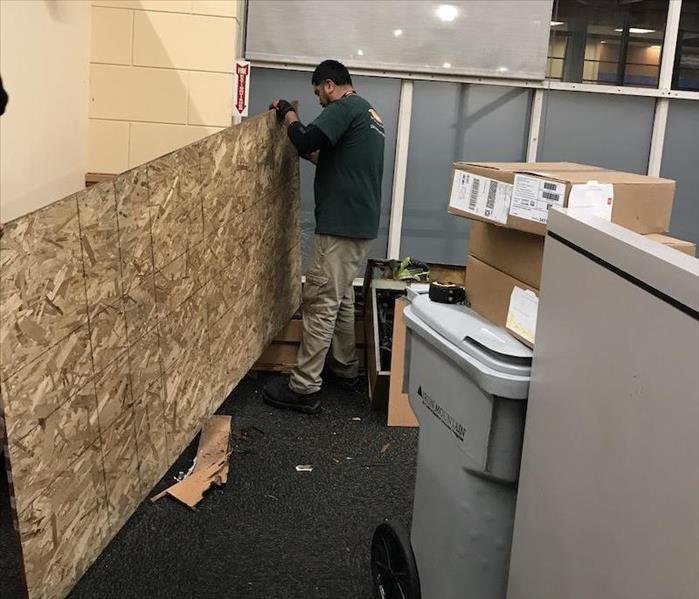 Flood damage to your commercial property is no easy task to handle. Call the pros at SERVPRO and let them do all the work.

San Leandro has developed into a thriving commercial town. Over the years, this East Bay community’s proximity to San Francisco has fueled its growth and attracted various types of businesses to its environs. Initially, San Leandro became a center for the meatpacking industry, drawing in operations like the Santos Linguisa Sausage Factory and Saag’s Artisanal Meat Company. The town’s population ballooned following the Second World War, increasing from about 20,000 in 1945 to an estimated 90,000 today. This rapid growth attracted other types of businesses, like the Ghirardelli Chocolate Company, Maxwell House, The North Face, and JanSport, to the area. Today, like other parts of the southern Bay Area, this community is quickly becoming another home to the tech industry.

The Environmental Perils of Operating a Business in San Leandro

While San Leandro is an excellent place to locate your business, it is also susceptible to numerous potential environmental perils. The most serious of these regional dangers are substantially increased risks of earthquakes and flooding. These catastrophic events could be caused by any of a number of occurrences like:

Ultimately, potential earthquakes pose one of the greatest threats to business owners and residents of the San Leandro area. In fact, just along the seven major faults in the region, the United States Geological Survey estimates that there is a 62% probability that a 6.7 or greater magnitude quake could occur between now and 2032. The chances of this occurring are greatest along the Hayward Fault that runs under our community.

Local flooding can result from earthquake-related events, wind action on tides, catastrophic dam failures, climate change, or other causes. Regardless of how flood damage occurs, SERVPRO of San Leandro is always ready to help your business recover and can be reached at (510) 352-2480.

How Does SERVPRO Remediate Your San Leandro Business’ Flood Damage?

If flooding ever damages your San Leandro business, you want the resulting mess professionally dealt with quickly and cost-effectively. At SERVPRO, we understand the importance of rendering timely, swift flood damage clean up and restoration services so that you can return to normal operations as soon as possible. This is why we employ the following innovative measures and equipment when solving your flood-related issues:

If you ever need commercial flood damage remediation services, call SERVPRO of San Leandro at (510) 352-2480.