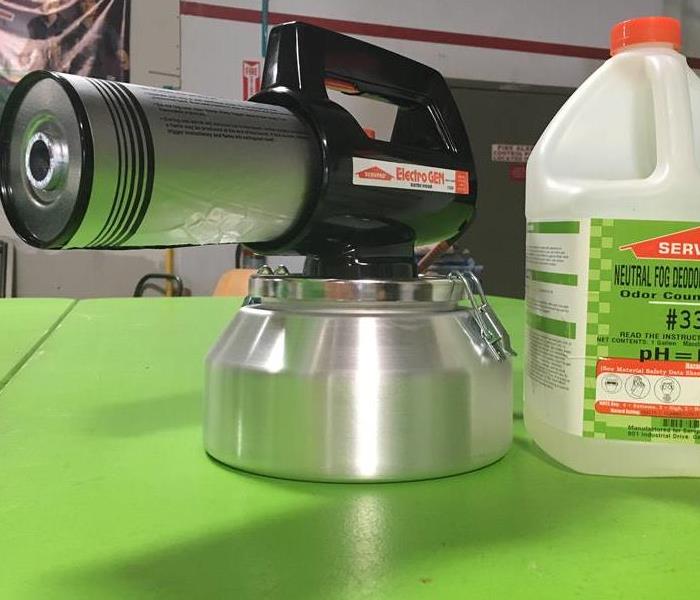 Thermal fogging is a method of applying deodorants that can be especially effective in treating strong odors caused by fire in a structure. As items are heated or burn, they may give off odors. Think about frying chicken or making French fries. The air is filled with cooking odors. Now, think about the smell of wood smoke at a campfire.

Campfire smoke can be very strong as the fire burns. After fire is out, the leftover ashes will have a lingering odor. However, the ashes usually won’t smell as bad as the larger leftover charred chunks of wood. That’s because the source wasn’t completely consumed and tiny odor particles are continuing to gas off.

When SERVPRO of San Leandro cleans a structure following a fire we have to remove the ashes and the sections of charred wood. That is a given. Our next concern in restoring a fire-damaged property is in addressing the smoke/soot contamination and the odor problem it creates. Soot with tiny odor particles can go everywhere. Because the hire of the fire is able to make the grains in wood and other surfaces such as paint to expand, the tiny odor particles can get trapped into the surface of these materials as they cool and shrink to normal size. This is where thermal fogging technology is useful.

A thermal fogging machine heats “oil that has been treated with odor counteractant ingredients.” The odor counteractant is transformed into a smoke that is laden with tiny odor killing particles. Because it’s “smoke” it will go into all of the same cracks and crevices the smoke from the fire went.

An important principle of odor cleanup is to match the sources of the odor. For example if the odor-causing source was wet, then a wet cleaning agent should be applied. When the odor-causing source was smoke, then a “smoke” treatment with matching additives can be applied. Allow us to explain. Smoke from a fire may contain specific additives. For example, it may be a grease fire, or a plastic fire. Whatever burned will have an effect on the lingering odor. There are specific cleaning treatments to match the fire source. There are special additives to attack each type of smoke that can be used in the canister of the thermal fogger.

Fire restoration work is technical, it’s complex and at SERVPRO of San Leandro we believe we are good at it… 510-352-2480.